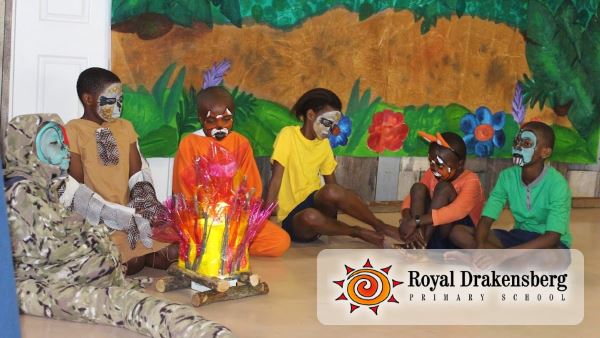 When Term 3 draws to an end we know it’s a downhill run to Christmas! It all started with Mandela Day in July. Guests from The Cavern joined the children at school and spent 67 minutes reading and face painting. It was a beautiful interaction and just lovely to see the sharing of stories, time and a little bit of love. And it has been an action packed term ending with our school play, The Gruffalo.

This term grades 2 to 5 produced The Gruffalo for their school play. As we have a small school we strive to allow all the learners an opportunity to have a speaking part in the play. This year there were 32 learners who partook in the production.

The learners worked extremely hard throughout the term to prepare for the play. Play practices were held three times a week. Two practices were to rehearse their lines and how they should conduct themselves on the stage. The third practice was to learn poems and dances that were to be integrated into the scenes. The children thoroughly enjoyed learning their dances and became extremely enthusiastic when it was time for the play.

The play was hosted by The Cavern on Wednesday the 20th September. The learners left school at 12 to go home and have a rest. They then arrived at The Cavern at 4 o’ clock. They had dinner on arrival and once dinner was completed they then went to get changed into their play outfits and got their faces painted. There was much excitement leading up to the start of the play.
The parents and Cavern guests were invited to come watch the play. The learners put on a fabulous performance and completely immersed themselves into their characters. It was a successful evening enjoyed by all.

Our week started with a beautiful poem about season changes performed by the grade 3’s. Everyone spent the week learning about what happens in spring time and making beautiful arts and crafts about this special time of year.

Friday was the big day, everyone was allowed to wear their lovely spring dresses and shorts, but sadly it was quite a chilly day. The morning was filled with creative fun; the preschool made caps with flowers on them and filled their empty winter trees with blossoms.

Each class went to a specific spot to plant their very own tree. The children carried little buckets and watering cans full water to give their trees a good start with the hopes that one day when they are bigger, the children can play in their shade. We now regularly water our trees and watch how they grow.

On the 24th of August, the Grade 1, 2 and 3 classes went on an exciting outing to Spioenkop Nature Reserve. There was much anticipation and discussion about which animals were going to be seen on the drive to the reserve. As we entered the reserve, the learners spotted zebra and impala. As we carried on through the reserve, the learners saw other animals, including blesbok, giraffe and wildebeest. The learners were most excited to see the giraffe and could not believe how big they are in reality. After driving through the reserve for an hour, we stopped close to the dam and enjoyed a picnic on the grass. The children enjoyed playing on the swing and see-saw at the picnic area. We drove around the reserve for another hour after the picnic and saw more impala, zebra and wildebeest.

Sports day was enjoyed by the children. There was much excitement in the air that day. The children were divided into their two teams, the Duikers and the Bushbuck. Each learner wore their team’s t-shirt, red for Bushbucks and yellow for Duikers. Both teams lined up to walk to the big field where all the races were set up. Each and every class had their own race to compete in.

At the end of the day the yellow team won. The children enjoyed hot dogs and juice after the races.

Quotes from our Grade 2 children:

For outdoor challenge, the grade 4 class went horse riding. We went up to The Cavern in the morning to get our riding helmets and then headed for the stables. Our guides were Chris and Wiseman, they showed us the horses and introduced us to the horse we would be riding. My horse was called Socks. He was a very big horse. After putting all the riding equipment on the horses, we started our ride. We rode around The Cavern, up towards Top Dams and Mays Falls. The Cavern horses are very well trained and did not scare me. We were allowed to canter a little along the flat section above The Cavern. Ayanda’s horse and Simphiwes horse raced each other even though both boys were pulling on the reins. We were allowed to brush the horses when we got back to the stables. We then enjoyed eating our popcorn on the way back to school.

The Outdoor challenge for Grade 5 was to go on the zip-line at All Out Adventures. I was very nervous as I am scared of heights. We were collected from school and taken to All Out Adventures. When we got there, we were given the harnesses and helmets and shown how to put it on correctly. Our two guides were Spook and Sizwe. We walked to the start of the zipline and were given the safety instructions. I was first to go on the line, while it was very scary I had a lot of fun with the world zipping by. I was lucky as my friend Phiwe was too light to build up enough speed to make it all the way to the platform so Spook had to help her. She hung in the middle for a few minutes while waiting for help. The guides at All Out Adventures were excellent and made me feel very safe.

We look forward to the final leg of 2017. We would like to thank all our sponsors and supporters for their contributions in helping us provide a quality start to the children’s education.

When life gets tough and challenges arise, when we feel that we are not making great strides and when things seem hopeless, it it so important to focus on things that inspire and motivate us. Children and their energy, their love of life and their willingness to learn is possibly one of the most amazing forms of motivation. This coupled with wise words ensures we keep marching forward.

“Education is the great engine of personal development. It is through education that the daughter of a peasant can become a doctor, that the son of a mineworker can become the head of the mine, that a child of farm workers can become the president of a great nation. It is what we make out of what we have, not what we are given, that separates one person from another.” ~ Nelson Mandela